For those wishing to make a Trans-Siberian rail journey without travelling on a group departure and with the aid of our representatives and guides we can tailor a trip to your specific requirements.

Not only can we provide first and second class rail tickets for the Trans-Siberian, Trans-Mongolian and Trans-Manchurian railways, but also most rail journeys across Russia, Mongolia or China. In addition to this we can provide all other aspects of your journey including international and internal flights, transfers to and from airports, stations and hotels and a wide range of accommodation and excursions. You tell us exactly what you want and we’ll do the rest.

KEY DESTINATIONS ALONG THE RAILWAY ROUTES

The centre of the Ural Mountains and the natural divide between Europe and Asia, Ekaterinburg is a flourishing hub, rich in natural resources and a colourful history. It was here where the last Tsar and his family spent their final days.

The foremost city of western Siberia situated where the Trans-Siberian crosses the River Ob. Now one of the largest cities in Russia and the biggest one, east of the Urals, Novosibirsk is a fascinating place to discover the history and ethnic diversity of Siberia.

The capital of eastern Siberia, Irkutsk is a markedly different city compared to others in the region in its atmosphere and architectural style. It is the natural stopover en-route to reach Lake Baikal, one of Russia’s greatest wonders.

The largest, deepest and cleanest freshwater source in the world is considered a natural treasure by the Russian people. Located in Siberia near the Mongolian border, and surrounded by mountains, forests and wild rivers, Baikal is an immense and breathtaking area of physical beauty. For the best views of Lake Baikal, we recommend you stay overnight in the village of Listvyanka.

Situated amidst the vast Siberian steppes is a truly intriguing stop on the journey, offering a rare mix of Asian and Russian styles.

Once created as a defensive outpost against invasions, for many years Vladivostok stood guard defending the Motherland on the Pacific coast of the Far East of Siberia. The city is now vibrant with an extraordinary mixture of culture and history.

Ulaan Baator is situated on the banks of the Tuul River encircled by four mystical mountains. Ulaan Baator and Mongolia was once the greatest empire under Ghengis Khan, and is now one of the most enigmatic yet romantic destinations on earth.

A remarkable destination by anyone’s standard the mysterious, mesmerizing capital provides an intriguing combination of ancient and modern style that appeals to all visitors. In particular, the Great Wall is one of the highlights outside Beijing, not to be missed.

Not only can you choose to travel on the Trans-Siberian, Trans-Mongolian and Trans-Manchurian railway routes but you could also combine destinations from two different railway routes, for example, Ulan Bator to Harbin.

Moscow • Kazan • Ekaterinburg • Omsk • Novosibirsk • Krasnoyarsk • Irkutsk • Ulan Ude • Khabarovsk • Vladivostok
Stretching for 6560 miles the Trans-Siberian railway was built between 1890 and 1905 to connect Moscow with the coastal city of Vladivostok. There are many wondrous places to explore along the way including Ekaterinburg in the Ural Mountains, Irkutsk the capital of eastern Siberia and the natural treasure, Lake Baikal.

Moscow • Kazan • Ekaterinburg • Omsk • Novosibirsk • Krasnoyarsk • Irkutsk • Ulan Ude • Ulan Bator • Beijing
The Trans-Mongolian railway allows you to enjoy the enchantment of Russia before discovering the wonders of Mongolia including the intriguing Ulan Ude and exciting capital city of Ulan Bator. If that’s not enough, you can then travel on to China. The line follows the same route as the Trans-Siberian from Moscow to Ulan Ude where it branches off and journeys forward to Ulan Bator and finally, Beijing.

Moscow • Kazan • Ekaterinburg • Omsk • Novosibirsk • Krasnoyarsk • Irkutsk • Ulan Ude • Harbin • Beijing
Following Russia and Mongolia, the Trans-Manchurian railway transports you to the vast lands of China where you can visit Harbin. Known, as the Oriental St Petersburg, it is thought to be one of China’s most beautiful cities. The line follows the same route as the Trans-Siberian from Moscow to Ulan Ude, it then branches off at the town of Tarskaya and heads through Harbin to the mesmerising capital city of Beijing. 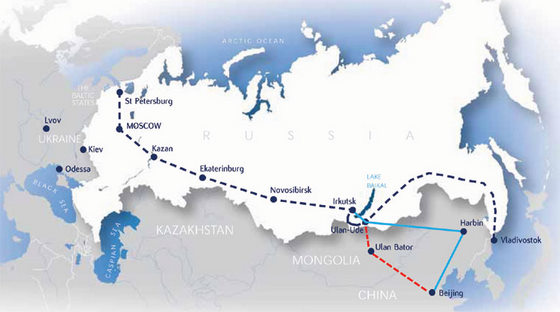 There are a number of factors which will influence the price of your travel arrangements, including the compartment category you choose, standard of hotel (we offer three, four & five star hotels where available), the season, and the complexity of the itinerary.

Rail Ticket prices fluctuate according to season and are subject to unforeseen increases by Russian Railways. The above rates should be used as a guide only. Your travel specialist will advise the latest rates when making your reservation.

It’s not just trains that we can help you with. To ensure that your Tran-Siberian experience is extra special ICAN Holidays can also arrange accommodation, visas, flights, excursions and even additional destinations before or after your train journey.

A visa is required for all the countries you pass through, even if you are only in transit. Visas for Russia, Mongolia and China are all obtainable through our visa service.

Some people do not complete the whole journey by rail and prefer to fly from Moscow to Irkutsk before continuing to Vladivostok, Ulan Bator or Beijing by train. We can arrange this aspect of your trip as well as providing your international flights departing from and to South Africa. Please contact us for a competitive quote for your international and domestic flights.

There is a range of guided optional excursions which you can take. From city tours at each stop-off to open air museums, cultural experiences such as dining with Mongolian nomads and staying in ger camps.

ICAN Holidays offers you a variety of pre and post Trans-Siberian destinations. Ask us about the 2 night ferry service from Vladivostok to Japan.