Prices are per person based on double occupancy. Rates are available for single travellers.

Your perfectly-planned rail-cruise combination tour takes you from the historic city of Boston to Canada's Cultural Capital of Montreal by sea, infusing your travels with unique sightseeing to historically significant landmarks along the way. 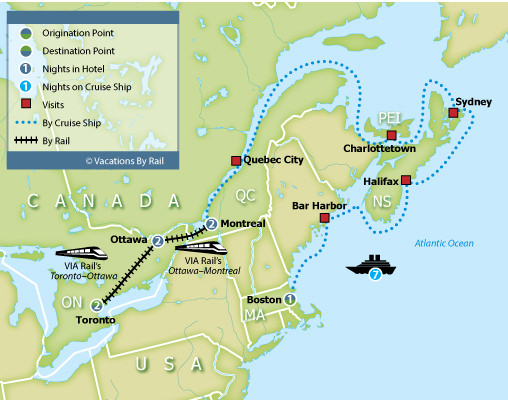 Upon arrival in Montreal, begin your travels by rail with visits to Canada's capital of Ottawa and the great city of Toronto. This unique holiday combines the best of the Eastern U.S. and Canada with two exciting modes of transportation and optimal sightseeing to create what is truly a trip of a lifetime.

Highlights of your holiday

Arrive in Boston, the starting point of your rail-cruise combination tour, and transfer on your own to your hotel. Grab your map and get acquainted with this scenic harbor city. Overnight Fairmont Copley Plaza.

Today embark on a sightseeing tour of one of America's most historic cities. You sail from Boston at 4:00 pm today. Once onboard, settle into your accommodations and begin to explore the ship's many amenities as your relaxing getaway at sea begins. Overnight ship. (D)

Located at the gateway to Acadia National Park, Bar Harbor, Maine, is a port of call that takes you to the heart of northeastern nature. You may elect to hike the Park's trails in search of white tail deer and other animals indigenous to the area. This New England coastal town has been a renowned summer escape since the 1880's. There are historic summer homes along Mount Desert Street that are listed in the National Register of Historic Places and currently operate as inns. Overnight ship. (B, L, D)

Halifax is the capital of Nova Scotia and today's port of call. It is recognized as the largest urban area in Atlantic Canada, a major cultural center for the region, and has the largest population east of Quebec City. The city has a number of art galleries, boutiques, museums, sidewalk cafes, and lively pubs. Seek out its historical landmarks including Citadel Hill and its Town Clock and Victorian houses along the South End. Overnight ship. (B, L, D)

Your port of call today is Sydney, the largest urban area on Cape Breton Island. The town is a showcase for many historic buildings dating back to its founding in 1785. You won't want to miss the recently constructed oceanfront boardwalk and marina-or the world's largest fiddle, which is out on display. Nearby attractions include the scenic Cabot Trail and the Fortress of Louisbourg, which looks just as it did in 1744. Overnight ship. (B, L, D)

Today finds you in Canada's smallest province, Prince Edward Island. Despite its size, it's big in history. This is, after all, the location where Canada's confederacy was created. The island also inspired the story of Anne of Green Gables, which was set in Prince Edward Island. The harbor area offers several boutiques worth browsing, and the downtown area includes beautiful Victorian houses and buildings. Popular attractions include Province House, which hosted the Charlottetown Confederation in 1864, and the Confederation Centre of the Arts, which is not only home to live theater and an art gallery but also the Charlottetown Festival during the summer months. Overnight ship. (B, L, D)

You're surrounded by beautiful scenery and have all day to enjoy it from the comfort of the ship. Take advantage of onboard activities including the Culinary Arts Center with its gourmet cooking demonstrations, tasting events, and cooking classes, or massage and spa treatments in Greenhouse Salon and Spa. Relax on deck-but keep your eyes peeled for local wildlife including whales! Overnight ship. (B, L, D)

Today's port of call is historic Quebec City, one of the oldest European settlements in North America. Spend the day strolling the city's cobblestone streets, admiring the 17th century architecture, and browsing the unique shops. Take time to seek out some of the city's most impressive landmarks including the Plains of Abraham, a historic area famous as the site of an important battle between the British and French during the Seven Years' War and now a park often used for festivals, outdoor concerts, and pure relaxation; the Ramparts surrounding Old Quebec, a UNESCO World Heritage Site and significant as the only remaining fortified city walls that still exist in the Americas north of Mexico, and the Latin Quarter. Overnight ship. (B, L, D)

Your cruise concludes in Montreal today. Your hotel is a short taxi ride away. Take the remainder of the day to get acquainted with this cosmopolitan city. Overnight Hotel Le Germain Montreal. (B)

Montreal is bursting with activities. The best way to get the lay of the land and visit the city's most popular attractions is through your Hop On/Hop Off city tour. Don't waste any time! Start early because there are so many impressive landmarks on this tour including Notre Dame Basilica, the Old Port of Montreal, Montreal Science Center, St. Joseph's Oratory, Mount Royal Park, and Dorchester Square. Overnight Hotel Le Germain Montreal.

DAY 11 - MONTREAL TO OTTAWA BY TRAIN

Depart Montreal today for the capital of Canada's government, Ottawa. The trip is just under 2 hours--the perfect amount of time for a quick nap, a bit of reading, or a light bite to eat. Upon arrival, drop off your luggage, grab a map, and set off to discover the city's unique shops and delicious restaurants Overnight Fairmont Chateau Laurier.

Located near the border of Ontario and Quebec, Canada's capital city is brimming with things to see and do. Take advantage of today's Hop On/Hop Off city tour to orient yourself with the city and visit its popular attractions and important landmarks. Highlights along your route include the National Archives, Rideau Hall, the Royal Canadian Mint, and Byward Market. Enjoy dinner tonight at one of the outstanding restaurants on Elgin Street. Overnight Fairmont Chateau Laurier.

DAY 13 - OTTAWA TO TORONTO BY TRAIN

Today embark on the 4 ½ hour journey by train to Toronto. Settle into your seat with a good book, grab a snack or light meal, and get to know your fellow travelers. Overnight Fairmont Royal York.

Take the day to explore Toronto at your leisure. The city's famed attractions are yours to explore on your Hop On/ Hop Off tour. Popular stops include CN Tower, Toronto's Harborfront, St. Lawrence Market, the Royal Ontario Museum, Maple Leaf Gardens, and Eaton Centre among other stops. Overnight Fairmont Royal York.

Your tour comes to a close this morning.

There are a number of factors which will influence the price of your travel arrangements, including the month of travel, category of stateroom onboard the ms Veendam, and the duration of your trip should you wish to add any additional nights or services.

Prices are per person based on double occupancy. Rates are available for single travellers. You can choose from three categories;

Hotels include the Fairmont Copley Plaza,Hotel Le Germain Montreal, Fairmont Chateau Laurier, and Fairmont Royal York (or similar). VIA Rail accommodations are in Business class and include a seat with picture window, access to the in-station Panorama Lounge (where available), priority boarding and complimentary newspapers, and a delicious meal with wine. Travel aboard the Holland America cruise ship in an Inside cabin including two lower beds convertible to one Queen-size bed and a shower.

Hotels include the Fairmont Copley Plaza, Hotel Le Germain Montreal, Fairmont Chateau Laurier, and Fairmont Royal York (or similar). VIA Rail accommodations are in Business class and include a seat with picture window, access to the in-station Panorama Lounge (where available), priority boarding and complimentary newspapers, and a delicious meal with wine. Travel aboard the Holland America cruise ship in an Oceanview cabin including two lower beds convertible to one Queen-size bed, bathtub, and shower.

Hotels include the Fairmont Copley Plaza, Hotel Le Germain Montreal, Fairmont Chateau Laurier, and Fairmont Royal York (or similar). VIA Rail accommodations are in Business class and include a seat with picture window, access to the in-station Panorama Lounge (where available), priority boarding and complimentary newspapers, and a delicious meal with wine. Travel aboard the Holland America cruise ship in an Verandah cabin including two lower beds convertible to one Queen-size bed, whirpool bath and shower, sitting area, private verandah, mini-bar, refrigerator, and floor-to-ceiling windows.